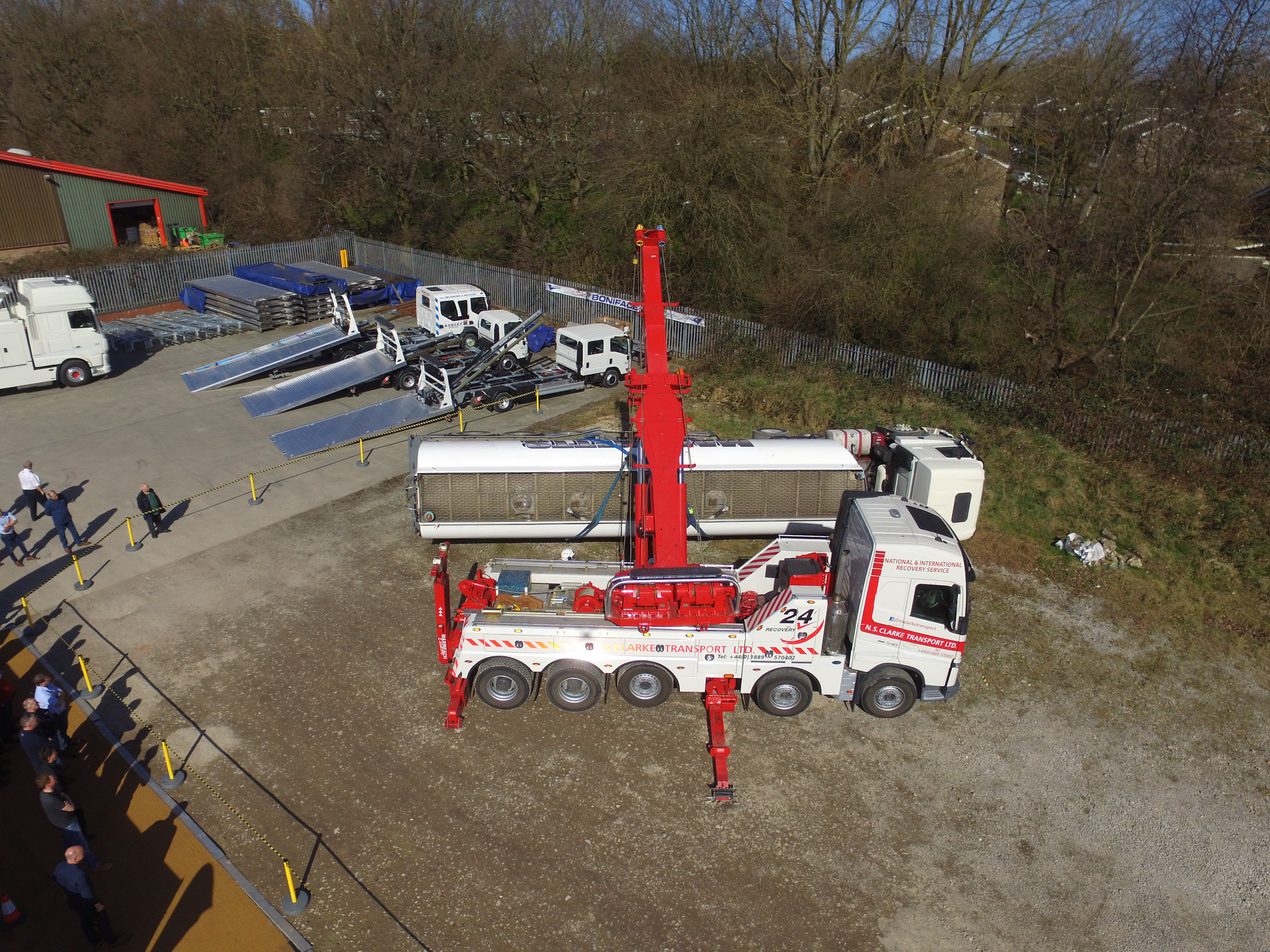 As part of a planned series of events, Boniface recently hosted a day dedicated to their range of Century Rotators. The event was held in Thetford and was attended by a selection of heavy operators from around the country.  In control of the demonstrations was Tom Luciano of Miller Industries who was assisted by Nick Ovenden.   The day featured two Century 1075 rotators, one owned and operated by NS Clarke from Rugeley, the other by Hough Green Garage from Widnes both of which were set up in various scenarios which demonstrated both the pulling and lifting modes of the 1075.  The overall aim of the day was not only to let people have a look at the latest technology that goes into the new Century rotator but also to demonstrate and explain how to best utilize the vast power and potential of these machines.  Tom started out by running through the features of the Century 1075 carefully explaining how this latest machine had been developed over time and why the D loops and other attachments were positioned in the places they were in.  He demonstrated various rigging options and explained in detail why he had chosen that particular method, highlighting the advantages and disadvantages of different techniques. Both he and Nick talked about centres of gravity which form a major part of the recovery situation, how best to use gravity to your advantage during the recovery and what not to do with your rotator!  The 2nd demonstration showed the power and stability of the Century 1075 which carried out a damage free lift of a fridge box weighing approximately 16 tonnes. This was achieved using the Miller spreader bar attachments which are just one of the many accessories available through Boniface.  The day was enhanced by recovery scenario presentations that Tom Luciano had been involved with during his travels around the world.  He demonstrated through the photographs how he created both upward and downward forces and made some extreme, and seemingly impossible recoveries, a reality, as well as explaining how to emulate them yourself with a Century rotator.  Lunch was followed by another heavy duty winching demonstration when the best places to anchor winch lines to get stability from the machine was explained.

Those who attended enjoyed the relaxed and informative way Boniface had presented the various techniques, most of them commenting that they had learnt something new from the experience.

This website stores cookies on your computer in order to collect information about how you interact with our website and allow us to remember you. We will only track your activity on our site if you consent by accepting our unique tracking cookie below. Please see our Privacy Policy and for more detailed information.